The ugly looks almost like the face except that his arms are out stretched and his lower jaw is more wide open. just like the face he has human eyeballs in his wide eye sockets except that there really bigger then they were. he also has human teeth there are recolored his teeth are a bit yellow and his gums are a dark pink color.

Wen ever the ugly enters the office the player must shut off a cam or hide if not doing so or failing the 50% chance of surviving under the desk the player will be jumpscared resulting in a game over.

In the pirate caverns entrance

In the meat freezer note he is looking at goofy's head

In the lounge
Add a photo to this gallery

The Ugly's Jumpscare (Unofficial)
Add a photo to this gallery

Some Fan Art by Pablopompom 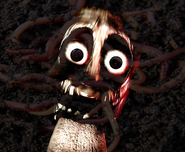 The Ugly Tribute
The Ugly Tribute
Add a photo to this gallery
I have been awaken... and i sence somebody
Its been a while since i seen this place
YOU MUST DIE
My friends you hurt them did you?
The Ugly's Scream
Retrieved from "https://five-nights-at-treasure-island-rp.fandom.com/wiki/The_Ugly?oldid=25813"
Community content is available under CC-BY-SA unless otherwise noted.