Night 1
Spongebob is the main antagonist in Five nights at nick's witch is based off of the original character from the show SpongeBob SquarePants.

Spongebob looks like the original 3D spongebob from many spongebob Games except that he is eyeless with blood pouring out of them and some tint of blood on his fingers.

Spongebob will make his way to the office if he appears at the door the player must shut the door until he goes away. If not doing so or failing the player will be jumpscared by him.

Spongebob will start in the Suits Room and will make his route to.

Spongebob in the suits room

Spongebob in the lobby

Spongebob in hallway B1 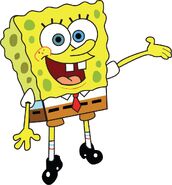 Second image of the original Spongebob 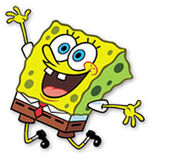 Third image of the original Spongebob

A promo of a normal SpongeBob, made by TheDeadBody
Add a photo to this gallery 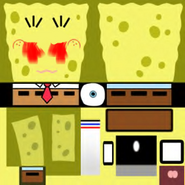 A picture of a real mascot suit of Spongebob including Patrick

Unused image of Spongebob in the Suits Room
Add a photo to this gallery
Retrieved from "https://five-nights-at-treasure-island-rp.fandom.com/wiki/Spongebob_SquarePants?oldid=25811"
Community content is available under CC-BY-SA unless otherwise noted.