Mr krabs looks like the original 3D krabs from 2003 Games except that his long eyes are gone and his torso body is sagged.

on night 2 if the player fails or does not at all stop squidward from breaking the power boxes mr krabs will be active on the power out after a thew seconds in the office the tv screen will turn on showing a easter egg of the song Oh yea mr krabs after the song ends the player is given a thew seconds untill 6 am if not the player will be jumpscared by mr krabs.

Mr krabs will start in the closet and will make his way down Hallway B2 and then will crawl fro vent A1 and then will fly fro vent A2 into the office if the not then he will pass the vent into vent B1 and B2 and will teleport to the lobby and will reloop his cycle into Hallway B2.

on night 2 on the power out mr krabs will simply teleport to the office and will soon try to jumpscare the player. 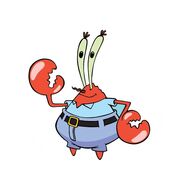 his promo in-game
Add a photo to this gallery
Retrieved from "https://five-nights-at-treasure-island-rp.fandom.com/wiki/Mr_krabs?oldid=20280"
Community content is available under CC-BY-SA unless otherwise noted.