MickMick is one of the true main tertiary antagonists in Five Nights at Treasure Island. Which his appearance resembles to Photo-Negative Mickey's and True Mickey's appearance. And MickMick is the true tertiary antagonist in the game Five Nights at Treasure Island: Found. He is actually True Mickey , but his colors are normal or presumptuously inverted by his equivalent.

MickMick is one of the main tertiary antagonists in Five Nights at Treasure Island. Which his appearance resembles Photo-Negative Mickey. MickMick is an aggressive suit towards the player's distance , he can act a bit fast on every camera on his strict path , he can take his fast path towards to the office , he is a Mickey Mouse suit but he has human eyeballs on his widened eye-sockets for some reason. He gets very active on Night 5, but then starts to become a threat to the player on Night 8 , he can take his strict path toward to the office , and attempt to try to kill the player fast. In "FNaTI : Found" , MickMick will originally activate on Night 4 alongside Oswald , Ortensia and Hourglass.

He is a somewhat hellish version of Mickey Mouse and his appearance is almost True Mickey's appearance and MickMick bears to be a strong resemblance to the Mickey Mouse cartoons as first and the second and the third depicted in his early and the 1995's cartoons , as all of his colors are matching the original Mickey Mouse character , and his features match the original cartoon character known as Mickey Mouse, and they looks rather shiny. and his appearance nearly resembles Photo-Negative Mickey's appearance, only except Mick Mick's appearance is not an Photo Negative look, and the eye holes of the suit being all widened with Human Eyeballs visible within them. MickMick's first every appearance was in the Trailer for the game at 1:05 into the Trailer, showing him looking into the Office room then looking towards the camera. Just Like The Face, MickMick has the original Mickey Mouse's and The Face's color scheme, except that he has a full body. MickMick's appearance resembles a normal Mickey Mouse costume, unlike True Mickey and Photo-Negative Mickey, his colors aren't inverted, however they are slightly discolored. MickMick's head has 2 large eye-holes or sockets with two Human Eyeballs within them. The only exception is if he attacks the player, in which his eyes will be normal and he will look exactly like the original Mickey Mouse. The reason for this change is unknown. And As its name implies, the costume is actually a Disneyland park Mickey Mouse character costume with Normal coloring. It is unknown why it was coloured such everybody Like It contains all of the Mickey Mouse features, such as circular ears, a small pointed tail, a pointed nose, a large and the best grin or smile, buttoned pants, shoes, and gloves. If he's reversed, it shows Mickey Mouse's Negative colors and he will be known as True Mickey.

He gets active at Night 5 , but then starts to become a threat on Night 8 , he starts at the Storage Room along with Oswald , Ortensia and Hourglass , and then he takes his specific path toward the office because he's really strict to the player , then he goes to the Staff Area , then he goes to the Meat Freezer and then arrive at the right side of the office , he can go to the Lounge before appearing at the left side of the office , If MickMick's Spotted Inside The Office , the player must pull up the monitor to shut off one of the cameras to avoid him from killing the player to survive , If failing to do that in time will result in jump-scaring the player and result a game over. He can sometimes go to the Caverns Entrance or the Roof or Character Prep 1.

MickMick will start activating on Night 4 alongside Oswald, Ortensia and Hourglass. He will start in the Storage Room somewhere behind the camera or CAM 4, and then he will take his specific path to the Office. He will eventually move to the Staff Area , then he will move to the Meat Freezer , then he will go to the Lounge just like the suits that proceed to move to the Lounge , and then he will eventually appear on one of the two sides of the Office. When he's in the Office , the player must pull up the Monitor to shut off one of the cameras to make him get out of the Office to avoid MickMick from killing the player. But if Failing Or Neglecting To Shut Off Any Camera In Time , MickMick will jumpscare the player to death. His devilish, badly distorted Screech will play along with his jumpscare.

He jumps from the bottom of the screen with his hands up. Then MiсkMiсk grabs the player by the paws. All this is accompanied by a devilish, badly distorted scream of a Photo-Negative Mickey's Screech. There is also a variant of the Jumpscare, in which MickMick comes out of the right side of the screen, looks at the player for half a second and punches him in the face with his paw. All this is not accompanied by animation, but only is the movement of the MickMick's model.

His other locations he can go to are :

But MickMick's Cameras Or Locations Spreaded Around Inside The Monitor Not Being Onto His Path Are : 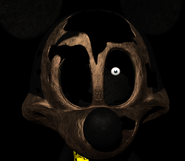 MickMick with Abandoned Mickey and The Rat

A Adventure version of MickMick 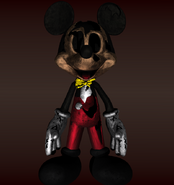 A Withered version of MickMick. 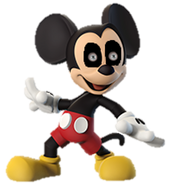 A Phantom version of MickMick.

MickMick in Real Life
Add a photo to this gallery
Retrieved from "https://five-nights-at-treasure-island-rp.fandom.com/wiki/MickMick?oldid=25822"
Community content is available under CC-BY-SA unless otherwise noted.