Melted Suicide Mouse Is A Melted Version of Suicide mouse and a fan-made antagonist.

He Looks Like Suicide Mouse, But Destroyed and melted, His Ears Are Missing, His Head Is Covered in Blood, His both Legs are Replaced With Spikes ,His Left Hand Is Melted, while his right one has got yellow claws. He has a Hole In His Belly, And A Red Human Eye.

He Starts In the broadcasting room. After a few seconds he will go to the Meat Freezer, after this he will go to the Office. At this time the player must immediately hide under the desk or a Shut off a camera. Neglecting or Failing to do this will cause him to kill the player. His jumpscare is a Close-up frame of his face with a very loud screech. 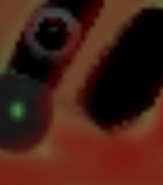 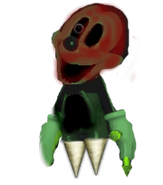 Melted Suicide Mouse's Jumpscare (BETA)
Add a photo to this gallery
Retrieved from "https://five-nights-at-treasure-island-rp.fandom.com/wiki/Melted_Suicide_Mouse?oldid=22790"
Community content is available under CC-BY-SA unless otherwise noted.