George The Eyesore, shortened to George, is the main true secondary territory antagonist in Five Nights at Treasure Island.

He can also be hared by saying these quotes, speaking throughout a dialogue audio :

George The Eyesore is an alternative version of True Mickey and Shade Photo-Negative Mickey. He resembles much more like Photo-Negative Mickey, the only changes is his black colored ears, his white/grayish-colored buttons, his poorly painted green/yellow shoes, his big, esque, human-like, eyes who belongs to PTLD-93 and a fedora hat on his nose, his face is darkened navy/dark blue, and his head has 2 large eye-holes.

George becomes active once the power is shut off, he will be wandering around Treasure Island for the rest of the night after so. When the power is shut off, he will occasionally appear at the Office, with his arms stretched, resembling Nightmare from Five Nights at Freddy's 4, to prevent him to attack the player, hiding is a must for about 5 seconds. If the player doesn't hide in time, or denies on doing so, he will disappear the Office, and after 6 seconds, Photo-Negative Mickey will be flashing at the player's eyes, doing a edited audio from one of George's lines, after transforming into him, killing the player. A flashing light will remain during the jumpscare.

When the power is on, George will reset all of his path, starting from the Storage Room, then moving to the Staff Area, Character Prep 2, to the Bathroom, Staff Area, the Meat Freezer, the Lounge then arrives to the Office. To avoid being killed by him, either shut off a camera, or hide, which gives the player 50/50 chance to survive. Delaying or neglecting both of the options will result in George slowly fading out the Office, then after 4 seconds, jumpscaring the player.

When George is active, he will sometimes either moan or say one of those quotes when moving:

George The Eyesore's Promo. (In The Extras Menu)

George The Eyesore attacking the player whenever the power's out.

George The Eyesore on The Roof alongside The Face.

George The Eyesore in The Office with the power outage.

George The Eyesore's texture in The Office with the power outage.

George's first jumpscare frame; where Photo-Negative Mickey is just staring at the player at the main menu.

George's second jumpscare frame; where Photo-Negative Mickey transforms to George with PTLD-93 eyeballs shining, and him lunging his hands and has a ghastly wide smile and bigger eye-holes.

George's third jumpscare frame; where Photo-Negative Mickey transforms to George with PTLD-93 eyeballs shining, and killing the player, with him closer to the player, and him lunging his hands to the player.

Ditto, but with full animation.

His Fedora Hat On His Nose.
Add a photo to this gallery

"Who Disturbs The Dead?"

WARNING FOR USERS OR HEADPHONE USERS : Loud Screech Sounds Set Below, May Be Very Loud.

George The Eyesore's Screech When Attacking The Player.

George The Eyesore's Screech When The Power's Out 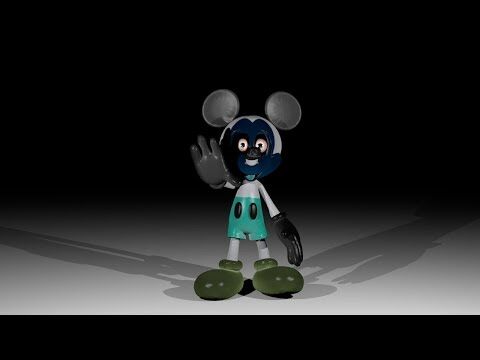 Retrieved from "https://five-nights-at-treasure-island-rp.fandom.com/wiki/George_The_Eyesore?oldid=24963"
Community content is available under CC-BY-SA unless otherwise noted.