But now... They are CUTEEdit

Adventure Mickey looks like Photo-Negative Mickey but is smaller in size. His feet, hands, ears and other stuff are bigger, he looks up and likes jumping a lot.

Idle: PN Mickey waits one turn and then makes an attack 3 times stronger (Based of damage in "Head Toss")

SMTCY: PN Mickey puts his blood on the floor, damages the enemies above it. (Short for So much thick, curdled, yellow blood) 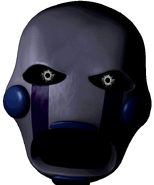 (The images will be added slowly, so be patient)

You over there!! READ THISEdit

This page belongs to the Landwii, and to edit this page you must ask Him, or he will be sad :C. However, you can edit to fix grammar mistakes or add categories.

Retrieved from "https://five-nights-at-treasure-island-rp.fandom.com/wiki/Adventure_Photo-Negative_Mickey?oldid=9638"
Community content is available under CC-BY-SA unless otherwise noted.