But now... They are CUTE

Adventure Disembodied is a protagonist in FNATI World.

Disembodied looks like Disembodied but the beak is more cubical, the eyes have shine on them and the hairs in his forehead are bigger. He is able to move his beak and move his hair. Sometimes he wears a sailor hat.

To The Office: Disembodied goes to the enemy, acting as a shield for the whole team.

Quack: Disembodied does a loud screech that stuns enemies, and gives some health to the team. This ability can only be used Once To The Office has been used.

Stare: Disembodied stares at the enemy, causing a moderate amount of damage. 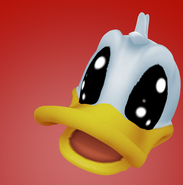 An image of disembodied looking at Adventure Disembodied.
Add a photo to this gallery
(The images will get filled slowly.)

Retrieved from "https://five-nights-at-treasure-island-rp.fandom.com/wiki/Adventure_Disembodied?oldid=24048"
Community content is available under CC-BY-SA unless otherwise noted.