But now... They are CUTE

Adventure Acephalous looks like Acephalous but he is shorter in body size and arm size his hands and feet are also smaller. he wears a brown jacket instead of the original yellow he also seems to have immense power on his left arm as he swings it more than the rest of the body, he is also able to move his neck.

Hear Me: Acephalous shouts causing damage to all of the enemies

Head Finder: Acephalous looks for his head in the enemy, eventually shouting in his face and damaging it

Rush: Acephalous rushes from the Staff Area all the way to his enemy, which only has a 50% chance of surviving. 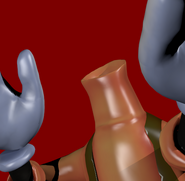 Acephalous in the character select screen

Acephalous's loading screen
Add a photo to this gallery
(The images will be added slowly, so be patient)
Retrieved from "https://five-nights-at-treasure-island-rp.fandom.com/wiki/Adventure_Acephalous?oldid=25798"
Community content is available under CC-BY-SA unless otherwise noted.