Whoa there! Read this before proceeding on!

Abandoned The Face is a distorted version Abandoned Mickey, and is a tertiary antagonist in FNATI 2: Let The Show Begin.

Abandoned The Face, the 1 Spare Suit which hasn't been seen in light-of 30 years. However, this Suit was currently found in the Cage of the Suit Warehouse. A Day Later, this Suit, due to soul possessions, was left in the Abandoned Suit Room.

Now that Treasure Island is abandoned, he is now left in the Abandoned Suit Room for years, causing himself to be like this.

Similar as Abandoned Photo-Negative Minnie's appearance, Abandoned The Face's appearance is based off the Original The Face, but is shown to be more lower-torso-melted. He is all dusted, making his look pale. He is showing slight discoloration, and lacks 1 human-like eyeball.

Abandoned The Face gets started off in the Abandoned Suit Room, which then takes his pattern onto:

At the same time, his teaser, but with The Face.

Abandoned The Face in the Suit Warehouse.

ATF's Jumpscare.
Add a photo to this gallery

ATF's Shade in the Janitor's Closet. 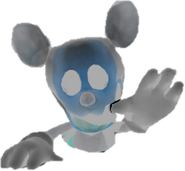 ATF in the Suit Warehouse's Teaser #1.
Add a photo to this gallery
Retrieved from "https://five-nights-at-treasure-island-rp.fandom.com/wiki/Abandoned_The_Face?oldid=25741"
Community content is available under CC-BY-SA unless otherwise noted.